Not too surprisingly, many people today remember mobile internet access beginning in 2007 with the release of Apple’s iPhone. Actually, mobile website technology really began in 1997 with Nokia’s 9000 Communicator smartphone. Over the next several years, other smartphones, like the Palm One Treo and Blackberry 6210 & 7210, as well as a few others, hit the market; but none were really very affordable for the average user. 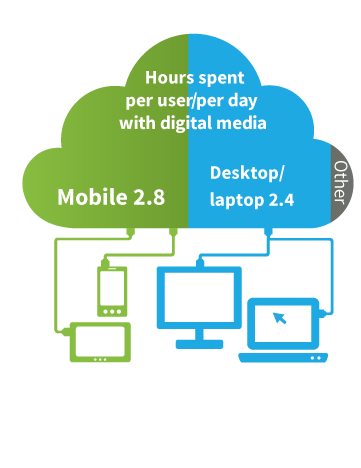 In the beginning, web capabilities were also unimpressive compared to what they are today. Still, people could see the big picture, and many expected mobile advertising to be huge – especially when the iPhone came out. It’s remained unexpectedly small, however, even in recent years; In 2011, mobile advertising consumed only about $1 billion globally, compared to a $32 billion budget for the broader internet advertising market in the US alone.

Moving Advertising to Mobile Yet mobile advertising continues to be an important part of a business’s marketing campaign, and the way it works is evolving. In years past, websites often included what’s known as “responsive design”. This detects the size of a web browser, and then reorganizes the information on the page to fit that size screen. The drawbacks to responsive website designs are larger images, pages and bandwidth, which eats up data and loads slowly. This has created a greater demand for mobile websites, which are ultimately faster and more convenient for mobile users. Projection for 2015 mobile ad revenue is expected to be about $15 billion dollars. Yet even with mobile devices consuming a great deal more of our internet exploration, desktop devices are still consuming more internet activities, so optimizing for desktop searchers remains an important part of a company’s advertising campaign.

AdWords Adjusts for Mobile Ads In early 2013, Google launched a new AdWords System called Enhanced Campaigns, which was supposed to be a better way to advertise across multiple devices. The goal of this type of campaign was to reach desired users with optimal advertising, regardless of the device. Companies would have the option to optimize their PPC campaign for mobile, or bid higher (or lower) for mobile traffic. The downside is, there’s no option to bid up or down on a desktop. The best case scenario is bidding down on a default CPC, and bidding higher on a mobile device. The end result is that companies now have to have responsive websites or automatically detect the device and redirect them to a mobile website. With these changes, it’s more important than ever to consider how you will set up your own advertising account. Certain companies will naturally receive more mobile searchers than other companies, so you need to take a hard look at your Analytics data to determine your next move, and optimize accordingly.

The drive towards using mobile, however, raises questions about how this format compares to other digital assets. To answer those questions, we have compared our normative databases for both #Adzglobe Team#